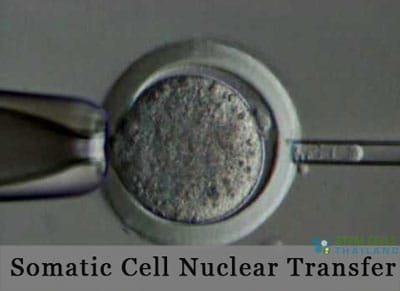 Somatic cell nuclear transfer (SCNT) is a procedure in which the nucleus of an adult or somatic cell is inserted into an enucleated egg for the creation of an embryo. In-Vivo a nucleus, which contains a persons DNA, somatic cell is removed from its vessel and the rest of the cell cultures are discarded. Somatic cells are found in adult stem cells other than the egg or sperm such heart cells,skin cells, nerve cells or any other non-germ cell lines.(25517467)

When, the nucleus of an egg cell is removed our doctors can simultaneously take the nucleus then inserted into the enucleated egg cell. After the cell is inserted into the egg, the somatic cell nucleus is finally reprogrammed naturally by the host cell.The final egg, now contains the nucleus of a somatic stem cell. The cell is activated through stimulated with a bio-shock causing it to begin dividing. (23866857) After a few mitotic divisions in cell culture medium, this single cell forms a blastocyst which is an early stage embryo with only about 100 cells but with almost the identical DNA to the original donating organism. 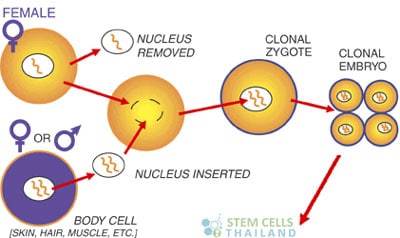