Updated June 09, 2020 – Pulmonary fibrosis is the thickening and scarring of the lung tissue. The term idiopathic denotes the cause is unknown and occurred spontaneously. Though it is not completely understood what causes idiopathic pulmonary fibrosis, the disease process is well-explained in various medical literature and case history.(25039426)

Under normal circumstances, the human body can initiate self-repair of the lungs using paracrine cell signaling but for some patients with interstitial lung disease, this normal lung repair process malfunctions resulting in the tissue around alveoli air sacs to thicken and become scarred. Thickened scarred lung tissue makes it difficult for oxygen to pass back into the bloodstream resulting in damage to both the entire cardiovascular system and lungs. The term Interstitial lung disease is used by pulmonologists to distinguish these types of lung diseases from others such as COPD and obstructive airways diseases. If left untreated, Interstitial lung disease results in fibrotic scarring of the lungs known as pulmonary fibrosis. Idiopathic pulmonary fibrosis usually gets diagnosed after radiographic lung scans start to show pleural-based fibrosis with honeycombing in the lungs and proliferating fibroblasts (fibroblastic foci.) 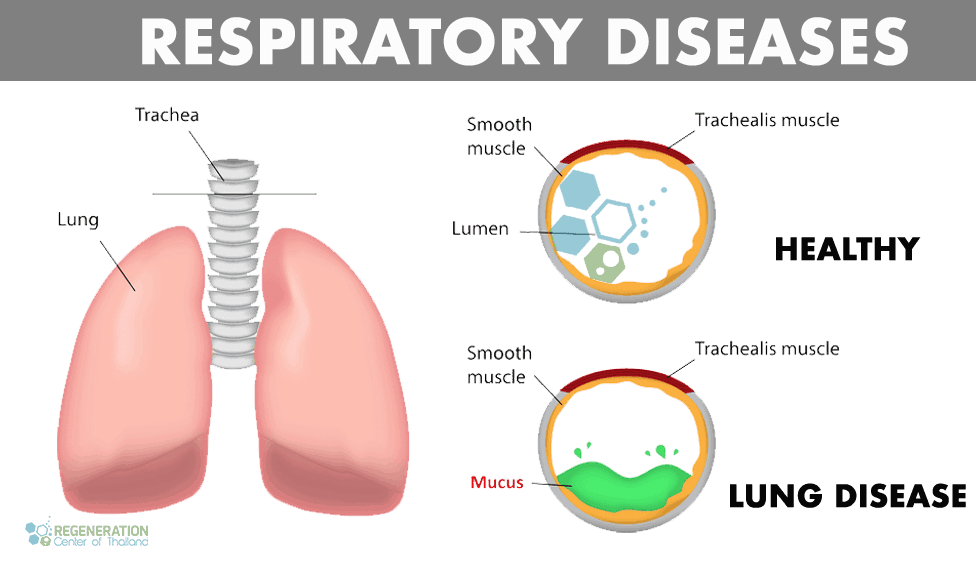 IPF and fibroid lung disease usually starts with a presence of inflammation in the alveoli. The alveoli are the tiny air sacs in the lungs where the exchange of carbon dioxide and oxygen happens. The fragile lining of the alveoli allows this gas exchange. Once these alveoli become inflamed and damaged in some way, the body’s reaction would be to activate the immune response and to heal the damaged alveoli.(25986617)

This causes scarring and thickening of the alveolar walls. Unfortunately, the thickened and scarred alveoli cannot perform efficiently during gas exchange. This ultimately leads to a lesser amount of oxygen that can be transported into the body and less carbon dioxide that can be expelled out. 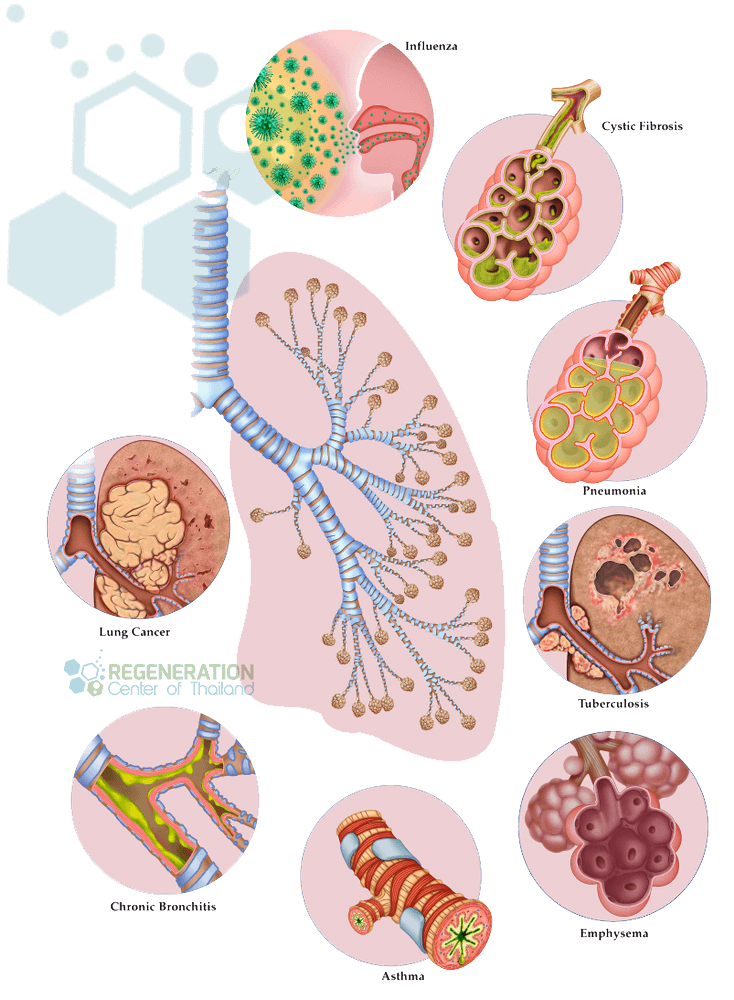 Some of the common signs and symptoms that are present in patients diagnosed with onset idiopathic pulmonary fibrosis are:

Since the underlying cause of Idiopathic lung fibrosis is often unknown, patients usually wonder how they get fibrotic scarring of the lungs. For most patients, the most common predisposing factors of developing interstitial pulmonary disease & alveolar fibrosis are: 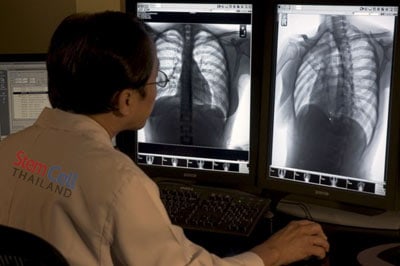 Symptoms of patients with interstitial lung disease. Depending on the stage and severity of a patients condition lung specialists typically order the following tests:

Screening for Mutations that may cause Familial Pulmonary Fibrosis

Genetic screening tests are recommended for family members of patients who have already been diagnosed with. There are currently no available gene therapies to treat autosomal interstitial lung diseases, but there are several clinical trials underway with the hopes of one-day curing genetic lung diseases. To help reduce any risk of developing fibroid lung disease, ILD or Pulmonary fibrosis consider including pulmonary tests as part of your annual checkup, refraining from smoking and getting regular exercise to keep the lungs and heart as healthy as possible. 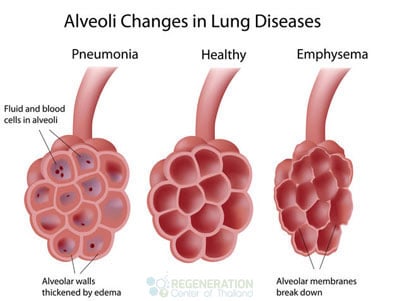 In the past, there were traditionally minimal options for treating chronic progressive lung diseases such as COPD and idiopathic pulmonary fibrosis. Even today, there are several clinical trials for trying to cure interstitial lung diseases, familial pulmonary fibrosis and idiopathic lung sclerosis using modified gene therapies but as of today, there are no effective pharmaceutical medication based cures approved for treatments.  In some cases, steroids are prescribed to help decrease the inflammation or mucomyst (Acetylcysteine) to reduce symptoms, but the effects are temporary and do nothing to the underlying cause of the disease. Lung transplants are another option for some but are considered very invasive, high-risk, and are usually only offered to advanced end-stage pulmonary fibrosis patients. Although it has its limitations, modified MSC+ lung stem cells offer a natural alternative to lung transplants for pulmonary fibrosis and anti-fibrotic medications.(25412619)

Your Stem cells are essentially the bodies pharmacy. Stem cells are are the building blocks of your entire body. These types of potent cells are called “totipotent” cells as they can change/differentiate into any cell, tissue, or bone in the human body. When used properly, MSC+ Stem Cells can help with the loss of lung capacity/reduced lung function by focusing on the destroyed or limited linings of the alveoli that are at the root of the disease. (25896401) For various reasons (Cigarette smoking, Viral infections, genetics) the bodies natural ability to regenerate is being blocked causing the types of complications that manifest themselves as fibrosis and lung hardening disease.

The Regen Center treatment for IPF lung sclerosis uses isolated & enhanced lung stem cells seeks to re-promote natural healing of the previously damaged alveoli cells, fibrotic scarring in interstitium lining of the lungs and scar tissue in lungs from pneumonia. The goal of the enhanced MSC+ stem cell treatment for pulmonary fibrosis and lung hardening disease is to assist the body in bypassing fibrotic scarring by regenerating new healthy tissues and blood vessels through a process called angiogenesis. The new lung regeneration treatment offers a safe, natural alternative to lung transplants by regeneration of lung tissue affected by fibrotic scarring and honeycombing through increased levels of myofibroblasts.

Please Note That Stem Cell Treatments for IPF and Chronic Lung Diseases are not appropriate for all patients. Those with multiple conditions, late stage, or travel restrictions due to the need for constant Oxygen tanks may not qualify for the 2-3 week treatment protocol. Please contact us for details. 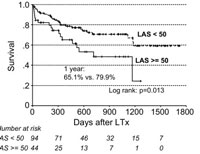 Interstitial lung diseases & progressive pulmonary fibrosis pose a significant challenge for pulmonologists and lung bioengineering. Diseases such as asthma, popcorn lungs “Bronchiolitis obliterans,” Idiopathic pulmonary fibrosis, lung cancer treatment, COPD, idiopathic interstitial pneumonia, Cystic fibrosis, emphysema & hyaline membrane disease are just some of the diseases that can be managed effectively via lung stem cell therapies. Due to the complexity and locations of the diseased regions, it can be challenging to effectively deliver cell therapeutic agents to the needed regions of the diseased lungs. The Lung Regeneration Center offers stem cells for lung disease patients using combination of MSC+ cells to stop rapid lung function decline. Our unique cell delivery methods targets the diseases from multiple vectors including guided radiography (when necessary), Intravenous, direct injection, Intrathecally and now for the first time via Intranasal inhalation for a painless and effective delivery of endogenous lung progenitor cells, lung epithelial stem cells to both the airway and vascular system of the lungs. (25986617)

Total of MSC+ Stem Cell infusions will depend on the severity of restrictive lung disease, and multiple stages may be necessary for patients with scarring in interstitium of lung or diffuse parenchymal diagnosis. For optimal results, multiple methods of cell delivery will be required. Due to the progressively degenerative nature of restrictive lung diseases, most patients will require enhanced cell transplants derived from immune-compatible cells.  For patients with multiple simultaneous issues, extensive honeycombing or severe respiratory failure, multiple treatments may be required. The isolated and expanded MSC+ lung cells used are pre-screened for infectious diseases, sterility, and potency. For patients with severe respiratory failure, aggressive combination treatment may be required.

Post-Treatment Lung Rehabilitation: Pulmonary rehabilitation services are optional but is highly recommended after any treatment. For patients with the option to stay in Thailand, we offer a complete integrative rehabilitation program in partnership with local hospitals in Bangkok. Pulmonary rehabilitation is also beneficial for patients who are experiencing severe difficulty in breathing or severe hardening of the lungs. Smoking is also much discouraged for patients with this condition, and active smokers will not qualify for our treatment.  The rehabilitation packages in Bangkok are available to all candidates as needed (2-5 hours per day, six days per week) . Medical treatment visas and hotel accommodations for long term stays can also be provided upon request.

Due to varying degrees of respiratory diseases, our pulmonary specialists will need to understand better the patients needs to qualify any potential candidates. Our initial review can be done online and takes around 7-9 business days for the medical assessment. Suitable candidates looking to reverse lung scarring naturally using Stem Cells will require a minimum of 2-3 weeks in Thailand. To begin the qualification process, please prepare your recent pulmonary tests such as spirometry exams, lung function tests, and radiology scans from an MRI or (HRCT) High-Resolution Chest Scans and contacts us today.