Embryonic germ cells are pluripotent cells that originated from the early germ cells that are responsible for the formation of sperm and egg cells.(18041447)

Embryonic germ cells are believed to mimic the properties of embryonic stem cells.

Germ cells are essentially very specialized cells that are crucial in reproduction and in regenerative medicine. Cells such as sperm,eggs and gametes eventually form a zygote that develops into a human fetus. Other cells that are involved in human reproduction are also referred to as germ cells and include gonocytes that help regulate production of sperm and eggs.(23514952) 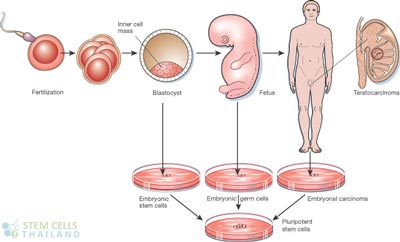 All germ cells in the body carry the germline. The Germline and daughter cells are the genetic material that organisms pass to their offspring. For humans, these cells are known as haploids.(24480362) When two distinct sets of germ cells combine, their haploids combine to form diploid cells that can continue to replicate through cell division and eventually form into a baby.